“Andrà tutto bene!”—National Cooperation, Solidarity, and Optimism during the Nationwide Lockdown in Italy 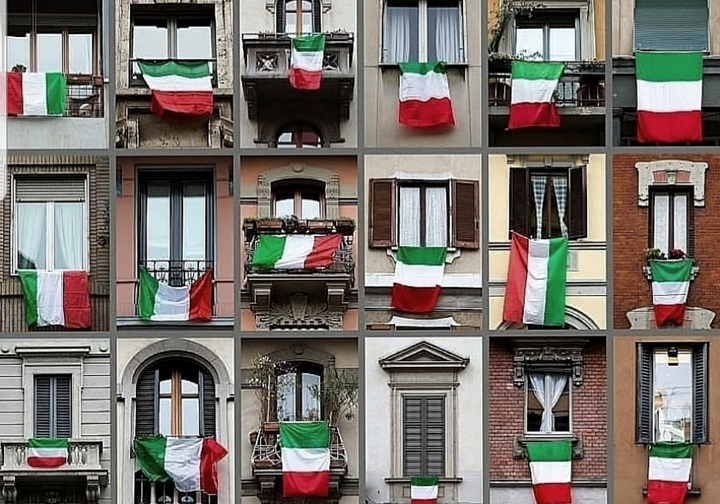 Italy is facing an unprecedented challenge due to the consequences of the ongoing coronavirus (COVID-19) pandemic. Prime Minister Giuseppe Conte called the current crisis in Italy “the country’s most difficult period since the end of World War II.” Thus, optimism, national collaboration, and solidarity have remained the indispensable “tools” for reassurance and hope among Italian citizens, helping them confront this extremely difficult period: together in spirit but physically isolated. As a result of the quick spread of the disease, on 9 March, strict nationwide lockdown was introduced in Italy to combat coronavirus, which, in practice, means severe restrictions on travel and the free movement of people to limit their contacts with other citizens. By the introduced measures, the government intends to slow down the spread of coronavirus and reduce the rocketing number of infections that cemented Italy as a global virus hotspot. This article would like to highlight those initiatives that have become notorious not only in Italy but in the whole world during the nationwide lockdown. These examples remind us of the importance of humanity and national unity, values that today are perhaps even stronger in the country than any time before. Italy is trying to get through the current situation in many different ways; however, there is no cure for the pain and sadness that have become unbearable for many people today.

At the very beginning of the lockdown, it was not easy to adapt to the countrywide restrictions that were introduced by the government on 9 March after regional restrictions had failed to stem the virus and the health system became increasingly strained. However, the growing rate of contagion and the high number of daily death toll drew attention to the fact that the new limitations are not just unpleasant measures but have a more important message, too: the current situation requires individual responsibility, collective obligation, as well as self-restraint and collaboration of the whole society. “Andrá tutto bene!”—everything will be alright. This is the slogan of reassurance and hope that spreads in many parts of Italy, posted on windows and buildings, appearing on drawings and encouraging posters that support hospital staff. Pictures and videos bearing the same slogan have become popular on social media platforms, too, as people try to reassure each other and brighten up the days spent in their homes under quarantine. Italian news channels and media spread the same message day by day, emphasising that strict compliance with state restrictions is crucial these days. Italians are trying to encourage each other, remain positive and confident, even though optimism is not enough for the families directly affected by the virus. An Italian lady with a national flag in her hand (the message of the author says: “We have gone through many [difficulties], and we will overcome this one, too!!!”)

Looking back through time, many Italians would act differently today than they did before. A young Italian filmmaker and producer, Olmo Parenti, like many other Italian citizens, did not take the threat of the pandemic too seriously in the beginning. “My friends and I were almost mocking the few people who believed the issue was serious from the get-go,” Parenti told a colleague and film curator of an American journal, The Atlantic. Just days later, Parenti felt like he was living in a different version of reality. The number of positive cases spiked dramatically. The entire country shut down. The economy took a nosedive. In his short movie, 10 Days Later: What Italians Wish They Had Known, Parenti wants to alert countries that were still behind Italy in terms of the amount of the infected through “quarantine videos.”

In the videos, Italians talk in the first person to the camera and give themselves advice based on their own, ten-day-earlier behaviour. The videos play as if warnings from the future: like Parenti, many of the people who submitted quarantine videos try to call attention to the importance of precautionary measures, such as self-isolation and social distancing. It is worth mentioning few of the different pieces of advice and messages of the Italians: “We took it lightly.” “If you must go outside, only do it if indispensable.” “What you are risking is not a regular flu.” “What is happening is much worse than you thought it was.” “You’ll realise that even just being able to breathe air in your own house … It’s something you should already be grateful for.” “You will live moments of unity you would have never imagined, like yesterday when we all got out on our balconies and the whole neighbourhood started singing. “You are not the only person in this world.” The concluding phrase of the video claims: “We underestimated this. You don’t have to do the same. Stay at home!”

The video calls attention to a number of issues, for instance, that everyone is required to stay at home these days, and to the importance of togetherness, optimism, and solidarity during this period. Immediately after the beginning of the quarantine, the Italians sought to find a way to endure the extremely difficult situation they had to face each day, despite being obliged to stay at home separated from their friends and family. A video published by The Guardian on 13 March highlights this phenomenon: from Siena through Naples and Benevento to Salerno, we can see various examples of how Italians sing and perform together. In some cases, they play a ballad or the national anthem (L’Inno di Mameli, or Mameli’s Hymn), but we find examples for more spontaneous performances, too, where they use the different kind of musical instruments they found in their homes.

We can hear the national anthem performed by Andrea Bocelli, and many other artists try to send similar messages to the world using the #WeAreItaly hashtag.

These videos are available on the Italian Foreign Ministry’s YouTube channel. Anybody could listen to the famous and still popular Italian partisan song, Bella ciao, too, presented as a solo balcony performance (available here). In the next video, we can follow not only improvised flash mobs but also a performance by an opera singer and a violinist in Torino, or Puccini’s famous aria sung by the Italian opera singer Maurizio Marchini on his balcony in Florence. In the same video, we can listen to Toto Cutugno’s famous song L’Italiano (also known as Lasciatemi cantare [“Let Me Sing”]) and Domenico Modugno’s Volare (“To Fly”). As the mentioned examples point out, Italian balconies are filled with music and singing during the countrywide lockdown: these and other similar performances have become popular in other countries, too, following the Italian “ways” of solidarity and optimism.

The video mentioned in the previous paragraph, source: YouTube

Nowadays, hashtags such as #iosuonodacasa (“I play at home”) and #iorestoacasa (“I stay at home”) can also be found everywhere in the internet: performers and musicians give regular live concerts from their balconies—these initiatives are reported by Italian news channels and media, too. On 27 March, the quartet of the Orchestra da Camera di Perugia published a video where they perform a piece of Georg Friedrich Händel’s famous opera, while various artists of the famous Opera House in Milan (Teatro alla Scala) give online performances to doctors and nurses (available here).

Practically, everyone is involved in spreading these encouraging and positive messages in Italy: artists, politicians, athletes, those who follow the happenings from their home under quarantine, and those who cannot stay at home because of their job duties and responsibilities: doctors, nurses, ambulance workers, merchants, firefighters, police officers, pharmacists. Besides the above-mentioned examples, there are also country brand videos that remind everyone of Italy’s cultural values, customs, and traditions. One of these videos (available here), for example, conveys the message to the people that as soon as the current state of emergency comes to an end, Italians will once again be able to return to the streets and squares, the popular places of social life and public gatherings in Italy. The citizens of the overwhelmingly Catholic country may also “participate” in online masses during the lockdown period.

The granny who became famous for her advice on coronavirus, source: YouTube

Despite this extremely difficult period, there are many examples of irony in everyday life, too: an Italian grandma’s video—who gives advice and humorous tips on battling coronavirus—has quickly become famous not only in Italy but worldwide, too. The recording is very lovable and immediately puts a smile on people’s faces: while watching it, one can remember the pieces of advice from his or her grandparents. Furthermore, what makes this message even more pleasant is the fact that the old lady imparts her wisdom in Italian, and there is also Italian music playing in the background. Many people shared a video by an Italian woman about her father defying lockdown to leave the house for his morning coffee. In this video, a middle-aged Italian man is debating with his daughter with a usual Italian temperament. The man is seen leaving through the front door but is later revealed to walk around the house to the kitchen window—to “order” his morning brew—where his wife is standing ready to make it for him. The emphatically ironic recording draws attention through Italian coffee drinking habits to the completely changed daily routine during the lockdown in the country that is sometimes hard to accept.

The elderly Italian gent who is not willing to do without his morning coffee, source: YouTube

All these examples illustrate well that, despite the extremely difficult and painful times, humour remained an important element of daily life in Italy. However, most people call attention to the gravity of the situation, and there are many examples of such videos, too. In a recording also published by The Guardian, for instance, Italian mayors sent messages to people who did not take the stringent measures that had been put in place in the country seriously. There is a mayor who explicitly asks people not to play sports on the street, while others want to remind young people that entertainment cannot be considered as a permitted activity during this period. Although the video has a serious message, humour is also important here: one of the mayors draws attention with irony to the fact that even hairdressing at home has no place during the restrictions. Italian television channel Rai News 24, also using the “stay at home” hashtag, keeps reminding all Italian citizens to respect the strict nationwide measures and to stay at home.

The other The Guardian video with warnings from Italian mayors, source: YouTube

This article intends to draw attention to some of the initiatives and phenomena that have become part of everyday life during the coronavirus pandemic in Italy and have become good examples for other countries, too. These initiatives call attention to the importance of national cooperation, respecting current rules, and to the different manifestations of solidarity and optimism. The author of this article wishes to stress the significance of all this but would also underscore the fact that, even though this post concentrates on a positive aspect of the current coronavirus issue, the situation today is extremely critical in Italy. Under these circumstances, everyone has his or her own responsibility and obligation. According to the data published by the Civil Protection Department of the Presidency of the Council of Ministers (Dipartimento della Protezione Civile—Presidenza del Consiglio dei Ministri), as of 2 April, there have been 13,915 victims of the pandemic in Italy.