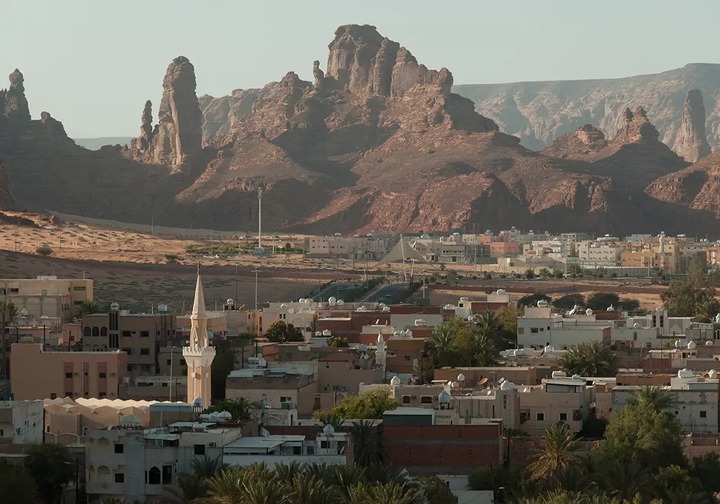 The Winter at Tantora Festival, organised by the Royal Commission for Al-Ula in the north-western Madinah province of Saudi Arabia, is a perfect example of blending the history of a city or a region with the spirit of the times to satisfy the needs of those who desire culture and entertainment. The following travel journal–like entry is not meant to be a tourism promotional material; it merely reflects the author’s sincere admiration for Saudi Arabia’s awakening tourism potentials.

After exactly twenty-four hours of travelling, we find ourselves sitting in a gorge in the middle of the desert while an Uruguayan barbecue chef is doing the final adjustments to our steaks and we are sipping our non-alcoholic cocktails chilling out to a French DJ’s music mix. We need to forget our busy schedules in Budapest and surrender ourselves to a three-day spiritual experience in Saudi Arabia’s countryside. The site is a desert landscape neighbouring the ancient Nabatean city of Madali Salih, also known as Hegra, where many rock inscriptions carved in the sandstone preserve the memory of the Arabs’ ancestors. Travelling in the area is a very complex experience, as you have the chance to visit the rock-cut monumental tombs and harvest fruit with local farmers during the daytime, but you can also watch world-class concerts in the middle of the desert during the night, right after you have eaten your lunch or dinner, put together by celebrity chefs, in the pop-up versions of London- and Monaco-based restaurants. The landscape near Madain Saleh

Salman, the current ruler of Saudi Arabia, entrusted his son, Muhammad bin Salman, with the creation of an international tourist paradise from a kingdom hitherto closed to tourists. The 34-year-old royal descendant is a member of a generation that now forms the majority of Saudi society and understands and appreciates the importance of globalisation and multiculturalism much more than finding it worth locking themselves in by conservative norms. The modern Saudi people are fed up with travelling to the West if they want to watch the concerts of their favourite artists or have Western-style gastronomic experience. This is well recognised by Muhammad bin Salman. At the same time, the leaders of the country also consider it important to show that Saudi Arabia is a culturally and naturally rich and diverse country that is just as worthwhile to travel to as other popular tourist centres in the world. The multi-month cultural festival called Winter at Tantora is just one of the several seasonal events that aim to draw attention to each and every region of Saudi Arabia.

Madain Saleh, which lies in the northern part of Madinah province, is organically linked to the city of Petra in Jordan, both being former centres of the Nabatean Kingdom two thousand years ago. However, while Petra, one of the iconic locations of the Indiana Jones movies and a UNESCO World Heritage site since 1985, has been a most important tourist destination for decades, Madain Saleh has only recently become known to the public and was only granted the same protection as Petra by UNESCO in 2008. The distance between the two locations is approximately 500 kilometres, which, in the future, can easily be bridged either by road or via the modern airport in Al-Ula. At the same time, the Saudi state does not want to show that it is only competing with other Arab countries but that it is clearly in the forefront, which is reflected in the quality of services and the attitude of the locals met either during the festival or in the capital. Al-Farid or “The Lonely Castle,” one of the many monumental rock tombs in Madain Saleh

When you arrive in Madain Saleh, you will immediately feel that you are about to have a very special experience. As long as the eye can see, the desert is covered with island-like sandstone mountains, many of them carved out by the Nabateans to house monumental tombs. Our convoy of cars is escorted by a local lady tourist guide who drives her own car—a testimony to one of the cornerstones of King Salman’s social reform which now allows women to drive alone and travel the world without their husband’s permission. Another spectacular example of this is that, wandering through the rock tombs of Madain Saleh, travellers easily stumble upon Saudi tourist groups of mostly women who are happy to report that Saudi Arabia boasts a world heritage site and that the hitherto hidden artefacts are easily accessible by road now. Indeed, Madain Saleh provides an experience that only the pyramids of Giza or other similar monumental memories of thousands of years are able to give to the traveller. Had the Saudi state had the sole merit of making the ancient city accessible to world travellers, we could have left the country with satisfaction—but that is not the whole story.

Located on the ancient incense road, the desert oasis of Al-Ula was an important commercial centre for many pre-Islamic civilisations. The Nabateans and Lihyanites (or Dadanites) that ruled Al-Ula extended their empire to Syria in the north and to Yemen in the south, creating large-scale, multicultural kingdoms. A perfect example of this is the architecture of Madain Saleh, where we can recognise a significant Hellenistic influence. However, this cultural interaction was also evident in the everyday life, customs, and belief systems of the ancient empires prevalent in the region. Walking between the Nabatean and Lihyanite material relics, and knowing the region’s pre-Islamic history, it quickly becomes clear how important the emergence and spread of Islam was during the cultural and political tensions of the 6ᵗʰ and 7ᵗʰ centuries. In the same context, visiting Riyadh’s museums can also help you understand the significance of Muhammad bin Abdulwahhab’s religious reform movement in the 18ᵗʰ century and the political emergence of the Saudi dynasty, which, just as at the time of the Prophet, was trying to bring order into the chaotic relations of the Arabian Peninsula.

Besides the beauty of the historical monuments, a tourist who travels to Saudi Arabia has a very pleasant experience as the programmes are well-organised and the guides provide a highly professional English-language service at nearly any sight. In addition to that, travellers can enjoy the highest level of the famous Arab hospitality and kindness at every destination. This is manifest in the welcoming attitude of local farmers who are happy to introduce you to their daily lives and also in the conversations with your Saudi hosts who, between two sips of the obligatory Arabic coffee, share their thoughts on the development of their country. And, if you speak some Arabic, barriers will be further reduced during the conversation, as locals will share their views more honestly and in greater detail. However, on a critical note, there is a significant difference between Arabic- and English-language information in several places. This is also true for descriptions in museums, where it is worth reading Arabic and English descriptions separately, as they contain different—but fortunately not contradictory—information.

The quality provided by the Western-owned pop-up restaurants is, of course, impeccable. Similar professionalism is encountered at Maraya Concert Hall, an event venue set up in the middle of the desert in just two months. It was designed by an Italian architect firm, and the building, just as the event management, is also run by Italians. There, one can listen to HD quality concerts from classic and modern performers of pop, jazz, and rock music in the world’s largest fully mirrored building then relax in the Nobu restaurant on the rooftop terrace. The restaurants and the Maraya Concert Hall are full of Saudi guests who can enjoy the most important artefacts of their civilisation during the day and the highest-quality Western cultural and gastronomic experiences in the evening. If that is not enough, you can listen to an acoustic concert by young Saudi musicians next to the Elephant Rock in the middle of the desert, while shopping for a variety of Arabic and Western street food on site. The Maraya Concert Hall, the largest mirrored building in the world

After the three-day cultural experience, I could have returned home in complete excitement, but I was convinced that I needed three more days in Riyadh, Saudi Arabia’s capital of six million. The cityscape, car traffic, and dusty air may cast doubt on that decision, but, in retrospect, three days in the Saudi capital can be spent in a meaningful way and, after Al-Ula, many questions concerning the country’s history are also answered when you visit Riyadh’s museums. The most pleasant disappointment finds you in the National Museum of Saudi Arabia. It might arouse suspicion that only a handful of people wanders around at the entrance of the huge ensemble of buildings and that the number of visitors inside is not much more than a few during a winter’s working day. It soon becomes clear, however, that the museum, which introduces the country from a geological point of view and displays the heritage of the country’s different historical periods, can provide a very rich, more than four-hour cultural experience. The museum halls echo all the sites seen in the area of Al-Ula and provide a relatively detailed description that complements the information received from local tour guides there.

After visiting the National Museum of Saudi Arabia, we enter the 20ᵗʰ century at the Masmak Fort and the Murabba Palace. The perfectly preserved buildings are in a pristine condition and provide interactive presentations about the age of the state-founder, Abdulaziz bin Abdulrahman Al Saud, and his relationship with world leaders. The interactive exhibitions show you how the anarchy of desert tribes has step by step evolved into a centralised and modern state extending across much of the Arabian Peninsula. Of course, the discovery of the country’s oil resources also played a significant role in this, a fact that is not concealed by these exhibitions either. As you step out of the museums into the city, ongoing constructions and modernisation efforts can be seen everywhere. By the end of 2020, six metro lines are scheduled to be operational in Riyadh, with a total railway network of almost 200 kilometres. This can have a major impact on the city’s air quality, as, today, it is very difficult to get to anywhere in Riyadh without a car. The Murabba Palace in Riyadh, a historic building built by the founder of the Kingdom of Saudi Arabia

The Riyadh city municipality is conducting a full reconstruction of the historic Diriyya district of the city, which was only partially accessible during my visit. The Winter at Tantura festival and my experiences in Riyadh provided only a taste of what Saudi Arabia has to offer in terms of tourism. The festival ends in early March, to be followed, after a short break, by the Azimuth Festival. However, many cities and regions in the country offer cultural experiences similar to Al-Ula and Riyadh. In addition, it is important to mention that the Red Sea coast offers almost intact diving paradises that provide an alternative for travellers going to Egypt. There is so much potential in the tourism sector of the formerly closed Arab kingdom that it is definitely worth visiting the country at least once. As the current leaders of the country have a precise understanding of the needs of Saudi Arabians who are seeking culture and entertainment, it is small wonder that Saudi attractions are getting very popular among locals, too.