One Step Back, One Step Forward-ish 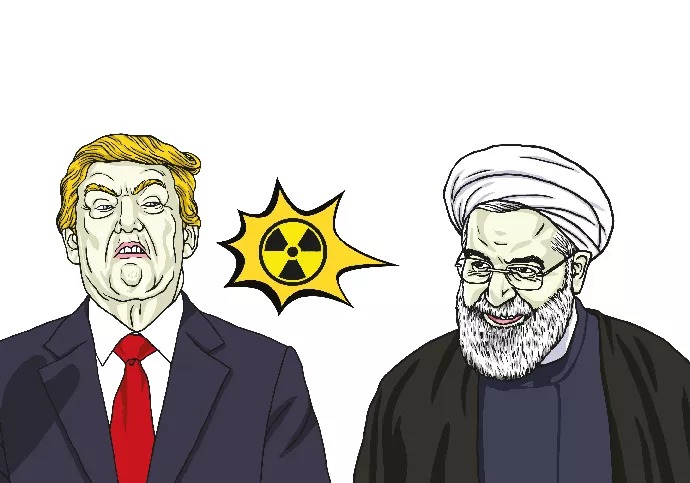 A few thoughts on Trump’s 8 January speech on Iran.

President Trump made sure that nothing, not even saying “good morning,” would get in the way of the mission statement at the top of his speech: “As long as I’m President of the United States, Iran will never be allowed to have a nuclear weapon.” He went on to spend much of what followed boasting about the US’s capacity to twist the arm of the Islamic Republic to make sure that his promise is kept, but, by the end, it seemed that, for all the big, lethal, and accurate missiles at his disposal, at the end of the day, Trump preferred tools that he had done much to weaken: pen and paper. Below are a few takeaways from the 8 January presidential address on the conflict with Iran.

Indeed, the speech came on the heels of a tense few days, beginning with the US killing Quds Force commander Qasem Soleimani by a drone strike, which was followed by an Iranian retaliatory missile strike on US bases in Iraq, as well as the accidental downing of a Ukrainian commercial aircraft. The hashtag #WWIII was trending (ironically) on Twitter, and The American Conservative was contemplating (earnestly) the merits of the military draft. However, it appears that neither party had the intention to escalate the conflict much further, with the Iranian strike likely designed to avoid US casualties.

“As we continue to evaluate options and response to Iranian aggression, the United States will immediately impose additional punishing economic sanctions on the Iranian regime. These powerful sanctions will remain until Iran changes its behavior.”

In fact, these powerful sanctions might also lead Iran to ratchet up its “behaviour.” It would not be the first time: recent acts of aggression by the Islamic Republic, including seizing ships in international waters, an unprovoked strike on Saudi Arabia, and shooting down two US drones, were also preceded by sanctions following Trump’s withdrawal from the JCPOA (aka the “Iran nuclear deal”). While certainly effective at inflicting economic pain on the country, sanctions clearly did not prevent it from engaging in probing. Demonstrations in Iran over the Death of Qasem Soleimani

“The time has come for the United Kingdom, Germany, France, Russia, and China to . . . break away from the remnants of the Iran deal.”

Iran recently announced that it would no longer comply with uranium enrichment restrictions imposed by the 2015 deal—a clear sign that the combined weight of the above countries is negligible compared to that of the US when it comes to upholding the deal’s functional framework. Trump’s call on the other participants of the agreement appears to be more of an effort to secure at least semi-formal international support for (or acquiescence to) his bellicosity towards Iran. Beyond giving him a better bargaining position with the Islamic Republic, this would also have positive domestic political implications for the President, as his advisors no doubt remember that, back in 2003, public support for US intervention in Iraq was to a considerable degree contingent on international backing.

“[W]e must all work together toward making a deal with Iran that makes the world a safer and more peaceful place. . . . We must also make a deal that allows Iran to thrive and prosper and take advantage of its enormous untapped potential.”

Much like in the case of NAFTA and USCMCA, Trump once again seems to be pushing for something that he is trying to sell as fundamentally different from its allegedly broken precedent but is, in reality, an incremental update at best. Which is all well and good in itself—pursuing a new JCPOA-like deal is a legitimate approach to keeping Iran from acquiring nuclear weapons while allowing it to “thrive and prosper” and become a valuable trading partner.

But “incremental update” might not be seen as having been worth the pain and effort it took to get there. Since the American withdrawal from Obama’s deal, the Islamic Republic has shown that it can make life more difficult for others in its vicinity. But everybody knew that already. Meanwhile, Trump has demonstrated that the US is capable of carrying out precision strikes against Iranian individuals and intimidating the country’s military into limiting its retaliatory strikes to little more than technological demonstrations. Again, everybody knew that already. The question now is whether the US can turn this mutual reassurance of capabilities into a better bargaining position for an improved agreement—and, now, that the lives of the 176 civilians aboard that Ukraine International Airlines flight is also on the scale, the political debate in the United States over what should and can be gained may turn out to be even more contentious than last time, while US negotiators might find their Iranian counterparts—wary of another abrupt change in American policy—much less inclined to trust them to honour their commitments.