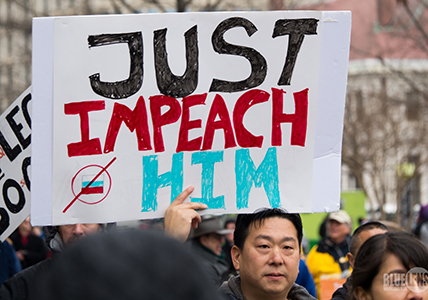 Shooting for the Moon

The Democrats are betting a lot on the impeachment inquiry against President Trump—and, at least politically, it appears to be a risk worth taking.

With the launch of impeachment proceedings against Donald Trump, Democrats are—to borrow a piece of tired internet wisdom—shooting for the Moon and hoping to at least end up among the stars. With the contents of a number of noteworthy testimonies widely publicised, public Congressional hearings underway as of Wednesday, and the first vote regarding the matter (on the resolution outlining the formal process) already cast, lawmakers’ and voters’ attitudes have also begun falling into patterns that can be used to predict the eventual outcome of the process—and with the Moon looking like a difficult target, Democrats’ best hope at this point appears to be a favourable alignment of the stars next November.

The clearest, most recent sign of this is a Politico/Morning Consult poll, which shows that 81% of voters have already made up their minds about whether they support the impeachment of the President. This result, combined with the unprecedented support for Trump demonstrated by lawmakers (nearly every member of the House voted to begin impeachment proceedings against Nixon, and even Bill Clinton had 31 members of his own party vote against him, while zero House Republicans broke with Trump), makes it extremely unlikely that Democrats will be able to flip enough GOP Senators to get the two-thirds majority necessary for impeachment to pass.

A recent Gallup poll shows that Trump is in a much more favourable position among US adults, independents, and Republicans today than Nixon was towards the last stage of the Watergate scandal.

Even as general public support for impeachment and removal from office remains higher than opposition to it, Republican voters appear to have firmly dug in their heels behind the President. Sensitivity to the mood of one’s constituency, including the risk that Trump’s wrath would pose in an election year, presents elected officials with a clear incentive to stand by the leader of their party. Prominent Republicans like Lindsay Graham have already demonstrated that they are willing to suffer the brief embarrassment of being confronted with contradictions between their opposition to the present inquiry and the one against Bill Clinton, as well as their previous and current stances on how foreign policy should be conducted. With political pragmatism clearly outweighing the need for at least the appearance of consistency, unless there is a major shift in the attitudes of Republican voters, GOP congressmen are bound to remain Trump’s firewall both when it comes to casting votes and doing damage control in the media.

This leaves Democrats with basically two approaches to using impeachment to win big in 2020, and they both rely on maintaining, fine-tuning, and ramping up their efforts at swaying public opinion. If they want a shot at getting the necessary twenty Republican Senators to turn on Trump, they need to get the people who put them in Congress to force them to do it. But with the aforementioned indications that the vast majority of people are unlikely to change their minds regarding the matter (although it should be remembered that such a widespread change of heart did come about in the late stages of the Watergate scandal), and barring the appearance of a Holy Grail witness, the Congressional process appears to be inching toward a defeat for impeachment in the Senate.

“Inching,” however, can be just the kind of long game that Democrats need to play to retake the White House. Even if they cannot turn enough Republicans in time for the Senate vote on impeachment, they can still draw out the process and make sure they maintain control of messaging to push GOP politicians into a very uncomfortable corner for the 2020 race. As a Democratic leadership staffer has been quoted saying, the core message to Republicans should be “Are you defending democracy or are you defending the president”? This, of course, is a question not primarily to politicians, but their constituents. It is early to tell how well Democrats can utilise the impeachment process to convince GOP voters to at least stay home on election day (Republican enthusiasm for voting in 2020 is remarkably high, providing fodder for theories that Democrats’ efforts might end up being counterproductive), but the hearings have only just moved to their public phase and will no doubt go a long way toward increasing the mindshare of the scandal at the heart of the process. With Trump being a consistently unpopular president among the general populace, it is not unreasonable to expect the publicity that the growing evidence will receive to drive enthusiasm among those who would like to see another person behind the Resolute Desk.

As the chart shows, impeachment is no easy business, so Democrats can rightfully hope that it will drag on.

There are already signs of Democrats’ adopting a more intensive and careful focus on pushing their message, with House Speaker Nancy Pelosi’s recent comments abandoning the term quid pro quo to describe Trump’s political dealmaking with his Ukrainian counterpart in favour of the considerably more familiar-sounding and direct “bribery.” Even the resolution mentioned earlier has been recognised as designed to put Democrats in a better position to maintain their desired narrative.

The timing might also be suitable for taking control of the Senate. Twenty-three Republican Senators are up for re-election in 2020, compared to twelve Democrats. Out of these, at least four races seem to be a toss-up, each involving a Republican incumbent. Should Democrats win every one of these seats—a task that they clearly hope would be made easier if they have opponents standing by a president against whom evidence of misconduct keeps piling up—they could even afford to lose a Senate race next year.

With actually removing Donald Trump from office looking like the least likely of all outcomes, Democrats seem to hope that they can put on a spectacle and keep the fireworks coming for long enough to at least leave the President and everyone standing near him burnt. Although political tribalism and pragmatism appear to be making many voters resistant to appeals to ostensibly fundamental consensuses, there are signs regarding the electorate that—even if we disregard ideas about presidential propriety—make the Democrats’ chosen strategy of impeachment a risk worth taking politically.