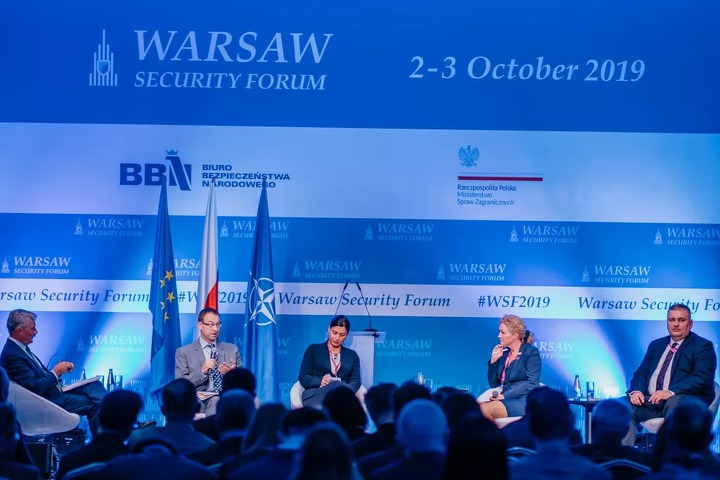 The project entitled “Warsaw Security Forum 2019: V4 Dialogue on Eastern Partnership” was carried out between May 2019 and January 2020 as part of the Casimir Pulaski Foundation’s annual flagship event: the Warsaw Security Forum (2-3 October 2019). The initiative was realized with three partner organizations: the Slovak Security Policy Institute (Slovakia), EUROPEUM Institute for European Policy (Czech Republic) and Antall József Knowledge Centre of Political and Social Sciences (Hungary). The project was co-financed by the Governments of Czechia, Hungary, Poland and Slovakia through Visegrad Grants from International Visegrad Fund. The mission of the fund is to advance ideas for sustainable regional cooperation in Central Europe.

The aim of the project was to identify the most pressing security challenges currently faced by the Eastern Partnership (EaP) countries (Armenia, Azerbaijan, Belarus, Georgia, Moldova, Ukraine) and – in this context - to prepare common policy guidelines proposed by the Visegrad states (Czech Republic, Hungary, Poland, Slovakia) as a way forward for the region. Increasing the importance of EaP countries for EU foreign policy realization requires more initiative to be taken by the V4 states, which includes creating a common advocacy platform to further the Eastern Partnership project. Such an effort was made in the framework of the project, which included an expert roundtable and a High-Level Session at the Warsaw Security Forum plenary, and convened over 60 experts from V4 and EaP countries, as well as an audience of over 300 participants.

The most important deliverables of the project were the following:

Roundtable “Discussing the Eastern Partnership 2.0: Visegrad States’ Perspectives” (2nd October 2019), Warsaw, Poland. The purpose of the roundtable was to gather representatives of the public administration, think-tanks, Academy, and media from countries of the V4 group and member states of Eastern Partnership to discuss the democratic transition experience of the Visegrad states and what lessons-learned where there for the EU’s Eastern Neighborhood. The event gathered over 50 experts, including 7 speakers.

High-level session "The Eastern Partnership at 10" – (3rd October 2019), Warsaw, Poland. The discussion highlighted the main challenges both the EU and EaP states are facing after 10 years since the beginning of the initiative. The discussion showcased the perspectives of two founding states of the project (Poland and Sweden) and Eastern Partnership states (Belarus and Georgia). The session gathered an audience of 300 Warsaw Security Forum participants.

A full recording of the High-Level Session “The Eastern Partnership at 10”.

Policy guidelines for the Eastern Partnership partner states from each of our states perspective (Slovak, Hungarian, Czech, Polish respectively).

B. Kot - Polish Guidelines for the Eastern Partnership

The project was realized at the 6th edition of the Warsaw Security Forum, the biggest international security and defense conference in the Central and Eastern Europe region. The 2019 edition took place on 2-3 October and focused on several issues including the 70th anniversary of NATO, 10 years of the Eastern Partnership project, the 20th anniversary of Polish membership in NATO, and 15 years of Polish membership in the EU. This year the conference became a discussion and networking platform for 1500 participants from 60 countries, including more than 170 world-class speakers, and over 100 journalists.