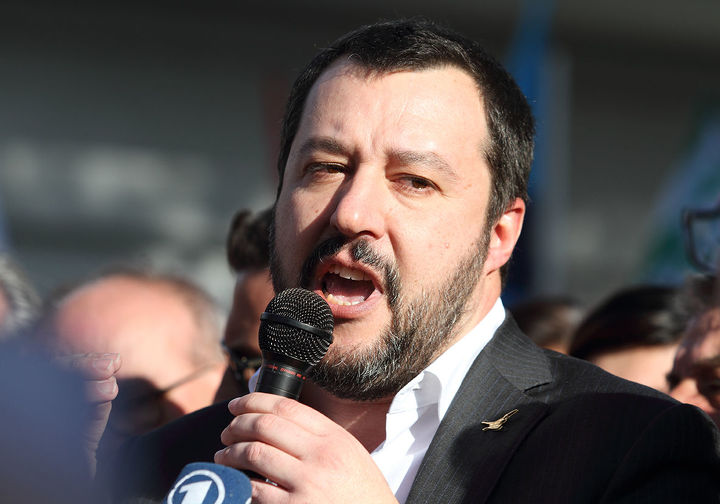 Salvini is well aware of the treacherous direction he is heading through, and one can assume he is simply trying to avoid finding a concrete solution to the immigration problem on the European level in order to keep the hype high around the issue at home and strengthen the support for his party before the upcoming European elections. Obviously if the “matter” were solved, the League would be deprived of its main forte, but further challenging the European institutions could prove to be a lose-lose game for the whole country.

By handing EU Commissioner for Migration Dimitri Avramopoulos a list with the names of 670 persons Italy wishes to relocate among EU member states, Interior Minister Matteo Salvini sent his ultimatum to the European Union: “If we move from words to deeds, the EU will be saved, if words remain only words, the EU will not exist anymore.” But to know what these “deeds” the new man of Italian politics asks so starkly from the Union are, we need to take a step back.

The decision of the EU Commissioner to meet the Italian head of government and Salvini on 14 January was announced following the latest tug-of-war over migrants, which saw Italy’s Interior Minister refusing to accept the 49 rescued men, women, and children aboard two German NGO vessels for three weeks, claiming that Italian ports are closed. On the other hand, Italian Prime Minister Giuseppe Conte assured the EU that if Salvini did not give up with his declarations, he would be ready to take the saved people ashore by plane. Eventually, the migrants were authorized to land in Italy, and the peninsular authorities agreed to welcome 15 of them along with a part of other 249 people the Maltese authorities rescued in the previous days. The remaining people will be relocated among other eight EU member states.

As already mentioned, Avramopoulos decided to meet the leader of the League and the Italian Prime Minister Giuseppe Conte in order to understand what are the Italian requests and expectations regarding the management of the migratory fluxes. Surprisingly, in Rome, the EU Commissioner was warmly welcome by a smiling Salvini, and, in the end, the meeting was described as constructive. “We share the same priorities,” wrote the commissioner on Twitter, “protection of borders, cooperation with third countries to stop irregular migration and increase returns but also establish a solidarity mechanism. We work together for European solutions to better manage migration. Europe is at the side of Italy to face this challenge together.”

Whereas, at first sight, the Sea Watch episode could represent a retreat from Salvini’s hard line against migrants, the meeting with Avramopoulos showed that something is shifting at the European level towards a concrete “shared responsibility” in the management of the migration issue, as it had been agreed on a European level on 28 June 2018. Leaving aside Salvini’s boisterous claims, and his list with 670 names—where also persons from Libya and Niger that Italy has voluntarily chosen to relocate within its border were included—the Interior Minister and the Prime Minister reiterated to Avramopoulos the need for finding a stable mechanism for the redistribution of migrants among all European countries as soon as possible.

In fact, as already pointed out by the Italian government during the June summit, the mechanism of relocation should involve all the EU member states and work automatically under the coordination of the European Commission. Moreover, Salvini reinforced the idea that the relocation system should be extended to every kind of migrants and not only to asylum seekers. Apart from these declarations, another fundamental demand of the Italian government during the meeting was the reform of the Dublin Regulation and of those points which state that a country is also responsible for asylum claims if a rescue happened outside its territorial waters. Given its special position in the middle of the Mediterranean Sea, Italy always complained about the unsustainable migratory flow on its shores, and, for this reason, the reform of the Dublin Regulation was considered as a priority also by this government. Rome’s posture from this perspective is absolutely incontrovertible, but how do one explains the fact that, in Strasbourg, the representatives of the League and of the Five Stars Movement were among those forces which have hindered the revision of the Dublin Regulation?

In November 2017, few months before the new yellow-green coalition was established, the European Parliament approved a proposal that could have rewritten the “first country of asylum” principle, replacing it—in case of greater incoming fluxes—with an automatic quota system in order to bind all the EU member states to do their part in the resolution of the migration crisis. In this occasion, the Five Stars Movement delegates were among those who voted against it, while the League MEPs even refused to attend not only the voting session but also the 22 committee meetings on the issue. The reasons behind why the Five Stars Movement casted a vote against this reform, despite the yellow MEPs’ active participation in its formulation, are mostly related to the fact that the many filters the new regulation applied to a single case did not help solve the real problem. While someone could agree or disagree with the opinion of the Five Stars Movement group in Strasbourg, it is hard to understand the absence of the League representatives on the day when one of those reforms which touch a core issue for Salvini’s party was voted.

However, this is not the only incongruence between Salvini’s ideas and actions. In fact, during the meeting on 14 January, to Avramopoulos astonishment, the Interior Minister of the EU’s fourth largest economy—after all, as Salvini quipped, Italy is not a mere Luxembourg—proposed again to reform the Dublin Regulation. Now, one should be naïve to believe that an experienced politician like Salvini unluckily chose to push the reform of a complicate regulation like the Dublin few months before the election for the European Parliament. It is more likely that Salvini’s moves are part of a well-studied strategy and the result of an exchange agreement with the League’s supporters within the European institutions. Probably, this could be better explained observing what alliance Salvini chose to forge in view of the European elections.

In the last months, Salvini has been tireless in building his Eurosceptic, anti-elitist, and sovereignist alliance, which is expected to play a decisive role in the next European Parliament. His recent trip to Poland, where he met the leader of Poland’s ruling party, Jarosław Kaczyński, is only the last part of his alliance-making tour across Europe. Besides Kaczyński, Salvini managed to secure Marine Le Pen’s support for his leadership in the group and had a very friendly meeting with Hungary’s Prime Minister Viktor Orbán, but he is also winking at Germany’s main anti-immigration force AfD (Alternative für Deutschland) and the Spanish right-wing Vox.

Salvini has been so far very proficient in his coalition-building efforts, trying to join parties belonging to different traditions in one big anti-immigration force. The immigration issue is paying off very well for parties such as the League. Just consider that, since last March, Salvini’s strong anti-immigration rhetoric helped his party jump from its 17.4 % support at polls to 31%. If new elections were held today, the Italian Interior Minister—whose activity on Facebook, Twitter and Instagram is impressive and earned him the nickname “Selfini”—would be the head of the next EP’s most represented political party, jumping over Merkel CDU. Notwithstanding these encouraging results, immigration could be the Achilles’ heel of the big transnational Salvini-led-coalition.

Anyway, the questions emerge: How could a party such as the League, which has built part of its electoral consensus on the perception of insecurity arising from the “invasion” of migrants and always blamed those countries which refuse to take part in the relocation system, imagine a working alliance with those forces which have a totally different perception about the management of the migration issue? How could the Italian leader defend the interests of his country regarding a fair relocation of the asylum seekers—plus the “normal” migrants—against countries which showed stark opposition to the quota system and other concerted proposals?

However, the migration issue is not the only inconsistency of this alliance. Just consider Salvini’s admiration for Putin, which causes great unease in former Eastern bloc countries such as Poland—or how all the League’s supposed allies dissolved when the Italian government challenged the EU Commission over the draft budget plans. Simply put, Salvini has his hands tied, and this makes much easier to understand the League’s abstention during the proposed reform of the Dublin Regulation and its ambiguous attitude in European politics regarding the support of the relocation system.

Salvini is well aware of the treacherous direction he is heading through, and one can assume he is simply trying to avoid finding a concrete solution to the immigration problem on the European level in order to keep the hype high around the issue at home and strengthen the support for his party before the upcoming European elections. Obviously if the “matter” were solved, the League would be deprived of its main forte, but further challenging the European institutions could prove to be a lose-lose game for the whole country. There is a fear that this mix of gambling policy, dilettantism, and bigotry risks to be fatal for Italy. As the draft budget plan drama revealed, there is no space for slogans and alliances when money is at stake. In a world where economy trumped politics, and where single nation states could not think on facing global problems such as immigration on their own, only unity translates into strength. To defend national interest, one must sit at the table, read the documents, fight to change them, work against tariffs, and negotiate on the EU budget. Today, Italy needs more cooperation, but it is desperately running toward a deep isolation. The aggressive competition of China and Russia, together with the untrustworthy US administration, shows that sovereignty is an empty word, and that it is no use thumping the table.